The cornerstone for the new church building was laid in the fall of 1925 started under Reverend Samuel Cook.

The building was designed by the architect Honeyman and Curtis[i] and the building contract was given to Steward and Coltart[ii]. The new construction was estimated to cost between $15.000[iii] and $17.000[iv]. The new church was expected to host about 310 people in the sanctuary and about 260 people in the basement room, which was designated for Sunday School.

In the article in the Journal of Commerce of August 7th 1925 the new building is described as follows:

“The edifice will be of frame construction with shingle exterior, built on concrete foundation. Half-timber gables and clerestory dormers which run well above the main eaves will relieve the severity of the roof lines, while this service for the walls will be secured by heavy buttress work carrying hammer-beam trusses.

The interior will have an open-timber ceiling as far as the collar tie of the hammer-beam trusses, the rafters and purlins being left exposed in natural finish. The choir and pulpit are place in a shallow apse enclosed with a depressed Gothic arch, and the organ will be placed at the rear (authors note: “of the pulpit”[v]), enclosed by a subsidiary arch. The floor of the auditorium is sufficiently sloped for every seat to have a clear view of the choir and pulpit.
The basement will be reached through the center of the south front. Radiating partitions will permit all screened-off classes to have an unobstructed view of a central speaker.”[vi]

The new church also included a “Ladies Room”, vestries, cloakroom, lavatories, and a room for the heating.

The congregation and buildings of “Robson Memorial Methodist Church”

The congregation of what was later known as “Robson Memorial Methodist Church” had its early beginnings in the year 1902 when Reverend Ebenezer Robson had started a Sunday School in the Schoolhouse that was located on E 20th and Kingsway. [i].

Ebenezer Robson had been one of the first Methodist Missionaries along the West-Coast and had been a minister in New Westminster as early as 1863[ii]. He was born in Ontario and arrived in BC in 1859 as one of four Methodist ministers.[iii]

He was in his late 60s when he started the Sunday School in Cedar Cottage. Soon in the same year (1902) a congregation started to form and was probably called “Epworth Methodist Church”, named after the street-car station located close to the School-House. (It must not be mixed up with Epworth Methodist Church, that existed earlier and closed down after 5 years of existence!

I believe that one reason for the consideration of a new church building was, that the old building had reached its limits. The congregation counted about 200 members in 1922[ix] and might have outgrown the old building. The aim to build a new church might have already been in place, before the fire occurred, yet so far the only source recording the plan of a new building stems from the context with the reconstruction of the fire-damaged building.[x]
This re-constructed and altered building stood on 1573 E18th Avenue until the year 1966 when it was taken down by the members of St. Mark’s Lutheran Church. At that time the building had been severely run down and beyond feasible repair.
On the lot of 1553 E 18th Avenue a residential building was erected. The building was used as Parsonage. According to the pictures accessible to me, the building must have been erected between 1907 (building not present on pictures yet)[xi] and 1921/22 (building can be seen in the background of the fire-damaged church)[xii].
[i] https://archivescanada.accesstomemory.ca/robson-memorial-united-church-vancouver-b-c
[ii] http://bclocalhistory2011.blogspot.ca/2011/01/cedar-cottage.html
[iii] https://www.memorybc.ca/robson-ebenezer
[iv] https://www.memorybc.ca/robson-memorial-united-church-vancouver-b-c
[v] https://www.memorybc.ca/robson-memorial-united-church-vancouver-b-c
[vi] http://dictionaryofarchitectsincanada.org/node/1524
[vii] For the original church building no building permit was issued. South Vancouver District first started to issue building permits in 1911. – Information according to Heritage Vancouver, Patrick Gunn.
[viii] See articles in the Vancouver Daily World on Feb. 4th 1922, Feb. 11th 1922, March 25th 1922 and March 30th 1922.
[ix] See Article in the Vancouver Daily World on Feb. 11th 1922.
[x] See Article in the Vancouver Daily World on Feb. 4th 1922 and Feb. 11th 1922.
[xi] See picture from City of Vancouver Archives: CVA 330-9: May, 1908: Exterior of Robson Memorial Methodist Church -
Additional information: AM1376-: CVA 330-7and AM1376-: CVA 330-8 show the interior of the church.
[xii] See picture from City of Vancouver Archives: CVA 447-41: Fire damage to Robson Memorial Methodist Church, 1305 East 18 Avenue, 1920s.
um Juni 08, 2017 Keine Kommentare:

Cornerstone of  Robson Memorial United Church (c) Kristina Breit The cornerstone for the new church building was laid in the fall o... 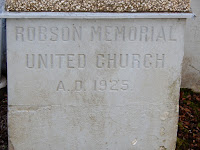